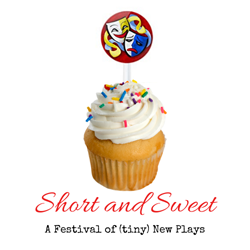 12 actors, 15 short plays representing the finalists chosen from over 400 pieces submitted in 2019 from as far away as New Zealand.

Saturday, February 13 will have 7 plays under the direction of Ben Ware.

Each night the audience members will have a chance to vote for their top 4 favorite shows, and Sunday, February 14, the top 8 shows will be streamed again!

The Short & Sweet (tiny) New Play Festival is supported in part by the Massachusetts Cultural Council.

In a bit of a sci-fi moment, a crisis in Ariel and Lil’s relationship threatens to change the course of history for their as-yet unborn child.

The grieving mother of a soldier who died in Afghanistan takes issue with a man she sees wearing an Army jacket when it becomes clear he is not really a veteran.

Two men meet while taking a break outside a gay bar with surprising consequences.

An object lesson of the devastating capacity of a cell phone to destroy tranquility and drive people crazy!

Jacob brings a special gift for his father David in the memory-care facility where the older man scarcely recognizes him.

Meeting up on a ledge high above the city, Martha and Owen share wine and reveal the reasons why each plans to jump off.

Who wouldn’t want to practically eliminate their crushing student debt except when faced with a hitch in the plan?

In the inner sanctum of the Webster’s Dictionary editorial room, panic reigns as they discover a major oversight in their definition of a common term.