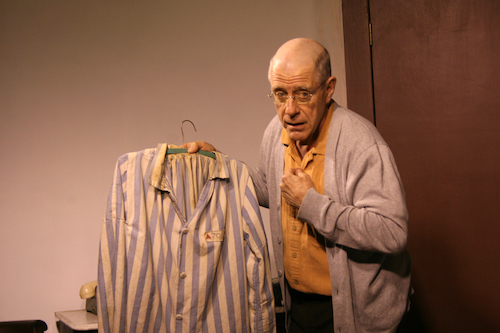 The Tattooed Man Tells All

$10 per view (link to performance will be sent with ticket confirmation)
Due to strong language this show is not recommended for anyone under 16 years of age.

Silverthorne Theater is honored to bring to audiences world-wide an important piece of dramatic writing, The Tattooed Man Tells All – a vital voice in the telling of the stories of the Holocaust.  Peter Wortsman’s gripping solo piece, was woven from a series of interviews conducted in Vienna in 1975 with witnesses to and survivors of the Holocaust, the scene of Western Civilization’s worst excesses.

STC mounted the live premiere production of this play under the direction of Ellen Kaplan in May 2018. This film is available online on a pay-per-view basis on the above dates. Organizations wishing to rent the film subsequent to these showing should contact us at silverthornetheater@gmail.com [link]

More about the play

By condensing these accounts into that of a survivor who is committed to a no-holds-barred retelling, Wortsman gives us a fully fleshed out dramatic character, the Old Man, warts and all, for the audience to come to know.

As the playwright says in his introduction, “The interchange[s] recorded on tape [were] painful to revisit…for my interlocutors’ merciless bluntness…[T]he subject of which [the Old Man] speaks has since been loaded with a leaden label, idealized and idolized, riddled with spotlights, torchlit for moral uplift, hagioscopically highlighted with a reverence formerly reserved for the Crucifixion.

The audience becomes the interviewer to whom the Old Man talks, retelling and reliving his time in the camp. “I could be whatever they wanted…melt in…become part of the landscape…or better yet, turn into thin air so they could look right through me.”

From his closet comes his camp uniform that quickly assumes a life of its own. The stories weave in and out of the Old Man’s memories and paint a picture both fascinating and horrifying.

Why now? Now we need to hear and see again what ‘humanity’ is capable of under duress and at its darkest moments. “You can’t just dispose of the past, cut it out like a malignant tumor! It’s still there, it’s still an intimate part of me…” Playwright Peter Wortsman

“I admired The Tattooed Man Tells All. It seems to me you handle both subject and dialogue with just the right degree of passion and distance. […] Congratulations. I would imagine it is a part one of the best actors would like to take on.” The late Arnold Wesker