Direct link to the YouTube site will be posted here on Wednesday, July 15. For Facebook, go to www.facebook.com/silverthornetheater/.  The reading will go live there at 7 pm.

After the reading, join us on Zoom for a POST-SHOW discussion with the playwright, director and cast members starting at 8 pm. Go to Zoom.com and enter the meeting number 868 5785 3018 – no password required.

Northampton playwright Darcy Parker Bruce’s Soldier Poet is a prize-winning piece that was premiered by Theatre Prometheus in 2017 at the Anacostia Arts Center in Washington D.C. The reading will launch on Silverthorne’s Facebook page and on its YouTube channel beginning at 7:00 pm.

The play centers on a gripping and timely story. In Aleppo two American Army Rangers rescue an injured Syrian woman about to give birth. At a nearby hospital, a neonatal nurse with an unwavering sense of duty struggles to save the lives of infants as her hospital is bombed.

Elizabeth Bennet and Mr. Darcy fall in love all over again — this time filtered through the world of the internet. Modern students in a FaceTime group discuss and build on this classic love story while acting it out, interjecting questions and opinions, quotes from movie versions, and even letters from Ms. Austen herself, to create a delightfully postmodern view of 19th century England. With five actors playing 22 roles, Pride@Prejudice is a unique and hilarious homage to Austen’s most beloved novel, and to our love affair with reading. Available online only on STC’s Facebook page or YouTube channel.

Following the reading, playwright Kramer will join the cast and director to talk about the play.  Kramer says, “I’m excited to see Pride@Prejudice in this online setting. The internet combined with Jane Austen’s brilliance inspired this script in the first place, so it feels like Chris Rohmann and Silverthorne are bringing the play full circle.”

For full details on all the 2020 readings, go to our READING SERIES  page. Each of the readings will be streamed on on Silverthorne’s Facebook page and YouTube channel on Thursday, June 18 beginning at 7 pm EDT. There is no charge to view the reading.  Viewers can visit YouTube – Silverthorne Theater Company  or https://www.facebook.com/silverthornetheater/ to access the performances on the date and at the time of the performance. These will be available one time only.

A fundraiser for Silverthorne – no admission, but donations welcome!

An inspired social satirist of the 1920s and beyond, Ruth Draper captivated audiences around the world with her one-woman monologues, often poking fun at the foibles of the bon vivant. Draper created whole casts of characters who would join her on stage, yet only in her – and the audience’s – imagination. Actor Penney Hulten of Northfield will inhabit the world of Draper in two of her most delightful comedic monologues, The Italian Lesson and Doctors and Diets. This virtual fundraiser for Silverthorne Theater was an inspiration by Hulten, a 2009 graduate of the Ada Comstock Program at Smith College where she earned her bachelor’s degree in Theater. Coincidentally, Ruth Draper earned an honorary degree of doctor of humanities at Smith College in 1947.

A native of the San Francisco Bay Area, Hulten has been involved with Silverthorne Theater since 2017 in myriad capacities including gala planning, admin support, and even modeling for a recent costume fashion show. Her most enjoyable assignment, she says, was assisting backstage with quick costume changes for GREATER TUNA in 2018.

“They say drama is easy and comedy is hard,” says Hulten. “For me it is the other way around. I’m always at my happiest when I can make people laugh. During the Great Depression film makers such as Busby Berkeley created films to bring spectacle and distraction from everyday life to audiences suffering from the aftershocks of the stock market crash. I hope to bring some comic relief to those of us struggling with the current pandemic and other concerns.”

Hulten’s early influences include Lucille Ball, Barbra Streisand, Carol Burnett, Katharine Hepburn and Gilda Radner. “I learned from these women that it was alright to be an attractive, independent, intelligent woman and yet do comedy that pokes fun at oneself. As a matter of fact, I found them more appealing for having done so. To be able to laugh at ourselves – and the human condition – is a gift to others letting them know it’s okay to be our own totally human selves: flawed, silly, hypocritical, klutzy, fearful, hilarious – all of it!”

Draper had her own sense of the absurd, yet never made fun with her characters. “Everybody is rather ridiculous, rather pitiful,” she said. Yet there isn’t any malice or acerbity in her portrayals. She is sympathetic to people while at the same time sublimely pointing out their inherent shortcomings. Audiences can see themselves – their neighbors, family members – in her characters. Draper’s alternating comedy and pathos in her tales evokes a knowing solace and understanding that comforts as well as entertains.

An internationally acclaimed diseuse (a woman who is a skilled and usually professional reciter), Ruth Draper was born in 1884 in New York City. She began displaying her talents early, delighting her siblings by imitating the adults in their lives. Later, she began giving monologues at private parties and schools. In 1920 she made her professional debut at London’s Aeolian Hall. Her skits, as she called them, and her proclivities expanded as she extended her cast of characters.

Creating her own original material while keeping it all in her head, she entertained audiences around the country and around the world; most notably to King George V and Queen Mary of Britain, as well as the royal families of Spain and Belgium. World renowned artist John Singer Sargent created charcoal portraits of her, and she was a favorite among actors such as Katherine Hepburn, Helen Hays, Sarah Burnhardt, and Laurence Olivier. Shunning interviews, she disliked publicity yet filled theaters for runs on Broadway, in the West End and the like. Draper continued acting into her 70’s and died in her sleep after a performance in 1956 during the run of a Broadway engagement.

Henry James was a friend of the Draper Family, and Ruth asked him if she should pursue a career as a professional actress. He said to her, “No, my dear child. You have woven your own beautiful little Persian carpet. Stand on it.”

Draper brought humor and magic to her patrons, and Hulten hopes to bring some of that same enchantment to local audiences via Facebook Live. Hulten says, “Laughter is the best medicine, so I invite you for a spoonful. Broadway character Auntie Mame said, ‘Life is a banquet and most poor suckers are starving to death.’ I say – come to the table and feast!” 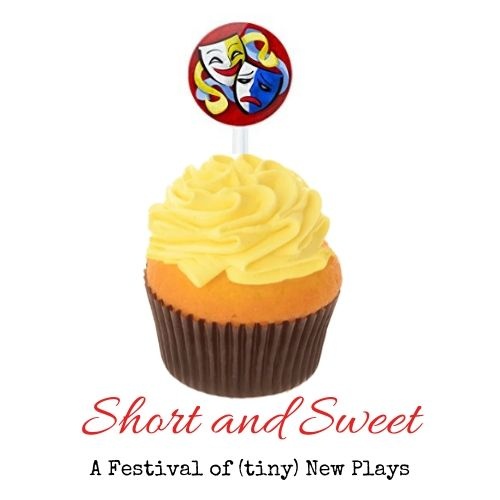 Because of the COVID-19 shutdown of all live performance, we were unable to bring you our Short & Sweet: A Festival of (tiny) New Plays on the scheduled dates of April 24-May 9. The plays were cast, rehearsals had just begun when the emergency closures were put in place.

We are pleased to announce that we are moving forward to produce the plays online! The plays will be streamed during September and as planned, audiences will be able to vote on their favorites!